First View of a Bee’s Innards

There are no pictures of Swammerdam, but this image of Hartman Hartmanzoon (1591–1659) is usually placed in text books with Swammerdam’s name under it. I suppose it’s ‘directionally correct’.

Today’s birthdays include two notables whom you’ve likely heard of (Lincoln and Darwin, both born on the same day in 1809), and one luminary you’ve perhaps not encountered: Jan Swammerdam (1637-1680), also born on February 12. Though we have Darwin Days and Presidents’ Days, we don’t have Dutch-Beekeeper-Scientist-Microscopists’ Days. And that’s a shame because Swammerdam is worth celebrating.

Swammerdam’s father owned a drug store. Swammerdam Senior had a habit of collecting curios – rocks and minerals and dried sheep heads and the like. So he shouldn’t have been surprised when his brilliant son – trained as a physician – decided to put doctoring on hold while he built up his bug collection. But the dad was mad and disinherited Jan, forcing the young man to make a living by hacking off infected arms and affixing leaches to thin the thick blood of royalty. It paid well, but his heart wasn’t in it. He’d rather keep bees and explore wee bee bits under a microscope. (Those 16th century Dutch inventions were surprisingly good at viewing bee stingers and drone legs – their magnification reached 200.) 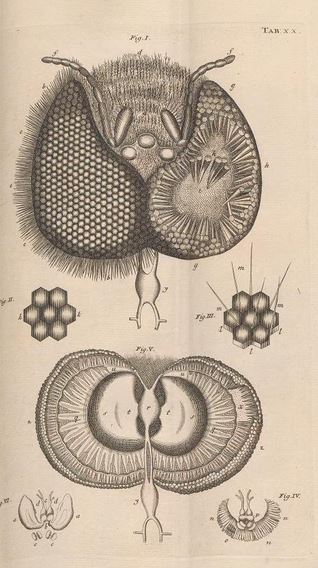 To appreciate the man and his times, I recommend this 6-minute video. It’s made by a beekeeper who is a science guy. He does a great job with his story on Swammerdam. 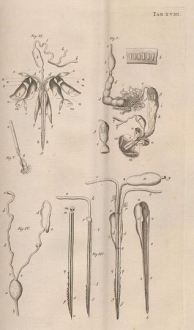 Young Swammerdam thin-sliced his subjects, teased apart their parts, and examined and sketched their innards. The anatomy drawings that populate today’s post are his: topmost is Swammerdam’s sketch of a bee’s home and stages of development; to the right is a honey bee stinger. Remember, these were drawn over 300 years ago and no one had ever seen such things before.  He continued these self-directed studies, diagramming the optical nerves that hooked compound bee eyes to brains and comparing well-developed queen ovaries with less endowed ones. On the side, Swammerdam discovered human red blood cells and tossed a chunk of Aristotelian philosophy out the loft window by demonstrating insect metamorphism. Until Swammerdam, people accepted Aristotle’s idea that caterpillars and butterflies are unrelated species of worms and flies.

Swammerdam didn’t last long. He burned out mentally before he was 35. He gave up science and became a disciple of a Flemish mystic who taught that the end times had arrived (in 1675!).  Swammerdam followed her and her other disciples into a life of penance and prayer, waiting for Armageddon. For Jan Swammerdam, it was a short wait. He died of malaria at age 43.